The "Tobacco Queen Negative" perfectly represents both the inward and outward focus of documentary that Alex Cunningham looked for as he curated the “There’s Content” exhibition on display in the Rubenstein Photography Gallery.

The photograph, taken by 2015 MFA I EDA alumni Aaron Canipe, leads off an exhibition celebrating the five year mark of Duke’s Master of Fine Arts in Experimental & Documentary Arts program. Showing Canipe’s hand holding a negative of a beauty queen subject, the photograph, along with the exhibit’s 22 other photos and six films culled from alumni thesis work, represent the artists as well as the “content” that has come out the MFA I EDA program.

Cunningham, a 2016 MFA I EDA graduate and adjunct instructor in Arts of the Moving Image at Duke, hopes the exhibit – open until June 20 – leads to greater visibility for the young program, as well as an understanding of its artistic diversity. 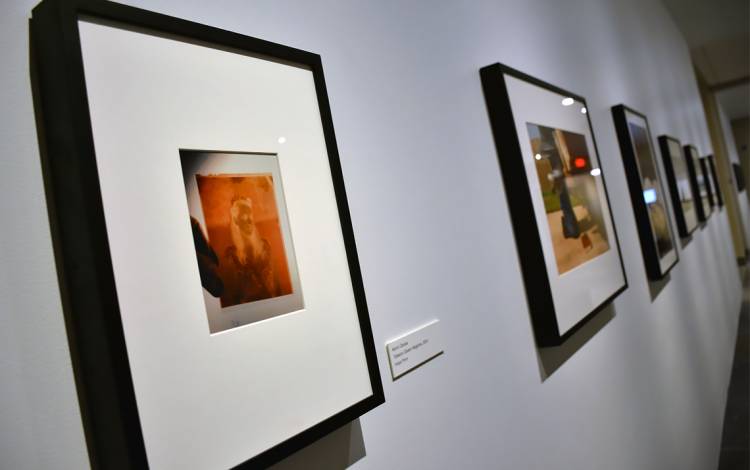 “I hope people learn about the MFA program, which is new and successful, but can fly under the radar,” said Cunningham, who added that he wants visitors “to be exposed to work that pushes the boundaries of what we call documentary and experimental work.”

"That's one of the beauties of the program, it's full of a bunch of artists tapping into different mediums. It's not unusual to see a thesis with a film, a sculpture and still photography all involved in it," said Kelly, a 2014 graduate of the MFA I EDA program, who curated a joint part of the "There's Content" exhibition at the Power Plant Gallery through early May.

Rubenstein’s Archive of Documentary Arts Curator Lisa McCarty said the exhibit in the Rubenstein Photography Gallery has been well received with a steady stream of people.

McCarty, a 2013 MFA I EDA graduate, has two photographs in the exhibit: “Corridor, Lacock Abbey (Double Exposure)” and “View Through Studio Window,” which was made with a homemade camera in Germany. Both pieces are part of a larger thesis portfolio documenting the origins of photography.

“I was trying to experiment with the fundamentals of photography,” McCarty said.

She echoed Cunningham’s hopes that the exhibit leads to greater visibility for the MFA I EDA program. "I still encounter people on campus who haven't heard of the program before," McCarty said.

There's been an undergraduate certificate program and continuing studies program in documentary at Duke since the early 2000s, but the MFA I EDA is the first Master of Fine Arts program at Duke.

"Employees, people in the Duke community, would find lots of familiar resonance in a show like ‘There’s Content’ because of the diversity of the work," said Tom Rankin, director of the MFA I EDA program.  "Documentary is so connected to understanding history and culture. It allows us to see the complexity, the warts, scars and beauty, of the human family."

The Rubenstein Gallery is in the David M. Rubenstein Rare Book & Manuscript Library. Visit the “There’s Content” exhibit during the library’s operating hours, typically from 9 a.m. to 5 p.m. Monday-Friday and 1 to 5 p.m. on Saturday.

Show Us Your Work from Home Fashion