What she does at Duke: Atwater splits her time between overseeing the 13 residents in Duke University School of Medicine’s three-year program for dermatology and seeing patients at Duke Dermatology’s Patterson Place clinic.

A major part of the latter half of that workload involves conducting patch tests, which is an area of dermatology that’s been a focus of her research.

She said the patch tests – in which patients wear patches on their backs to see which substances are causing allergic reactions when in contact with skin – often provide patients with peace of mind.

When she arrived a decade ago, Atwater did about four tests per month. Now, she said she does at least 40.

“I’m doing a much higher volume than I did 10 years ago and that’s because we’ve really ramped up our team and our methods for getting the procedure done,” Atwater said. “It’s like a well-oiled machine now.”

If the tests alert doctors to what’s causing the allergic reactions, the next step is to educate the patient on how they can avoid the substance and provide a list of products that will be much safer for them.

“We hope their lives are much more comfortable after they walk out of here,” Atwater said.

Earlier this year, she began her two-year term as president of the 1,100-member American Contact Dermatitis Society. In addition to maintaining lists of allergen-free products, the society also handles educational outreach initiatives and awards funding for research and mentorship.

“We do a lot,” Atwater said of the society.

What she loves about Duke: While the dermatology unit of the School of Medicine is large – it boasts around 140 faculty and staff – Atwater said the vibe is one of unique cohesiveness.

“In our department, it’s almost a family atmosphere,” Atwater said. “My colleagues, residents and staff are all very collegial. My clinic site is a really good working environment.”

Special object/memorabilia in her workspace: Mixed in with birthday cards from co-workers and photos of her family, Atwater has a few thank you notes posted on her desk. She said there are several more stashed around her office.

“When a resident or a patient sends me a note of thanks, I keep it,” Atwater said. “Everyone in every job hears more about the negative stuff than they do the positive things. So when I get something like this, I like to keep it and remember it. Then when I’m not having the best day, I can see that and feel good.”

First ever job: As a teenager growing up in a small town in northwest Illinois, Atwater worked at a Yogi Bear Campground.

The national chain of campgrounds allow travelers – often families – a place to park their car or RV and enjoy kid-oriented fun. The campground where Atwater worked, featured a water slide, an arcade, a miniature golf course and occasional visits from the camp’s namesake cartoon character and his sidekick, Boo Boo.

“It was a Yogi Bear Campground, so Yogi and Boo Boo were there,” Atwater said. “They’d come out every day.”

On occasion, Atwater would get in a furry costume and play the role of one of the beloved cartoon bears to entertain the younger campers.

“It was tough,” Atwater said. “It was summer and it was really hot.” 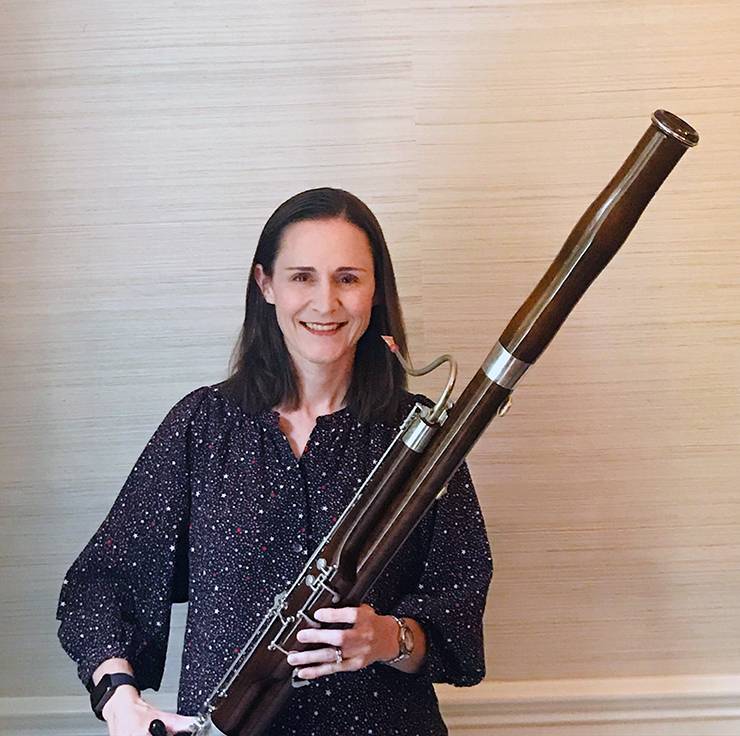 Something most people don’t know about her: On a seventh-grade field trip to a military band performance, Atwater saw someone play the bassoon – a large woodwind instrument – for the first time. She’d already been playing the oboe, which is in the same family of instruments, but the bassoon’s size and tone had Atwater interested.

Before long, her parents rented a bassoon, and she was taking lessons. She kept at it and played the bassoon seriously until her first year of college.

“Once I got to college, I got tired of carrying the bassoon around and I quit,” Atwater said. “Music is one of those things where, when you stop doing it, you’re really not good at it anymore.”

That point was proven a few weeks ago when Atwater dug out her bassoon and gave playing it a shot.

“I was terrible,” Atwater said. “But I will never get rid of it, though.”