Graduation was sweeter this year for a group of newly minted Duke alumni, thanks to a ceremony with supportive family members who had not graduated from college themselves.

The Duke LIFE (Low-Income, First-Generation Engagement) student group organized an inaugural “cording ceremony” on Friday for its members of the Class of 2019 and their families.  Amid cheers and whoops, about 40 graduates filed in front of 120 guests in the Von der Heyden theater in the Rubenstein Art Building to receive ceremonial ropes with tassels draped around their necks.

“That was our push,” said Kayla Thompson ’19, a Duke LIFE leader from Waxhaw, NC, who will attend Duke School of Medicine in the fall. ”We’d never had the parents and families before and as first-gens, they have been so important to us.”

“It’s been four years of joy – and pain and stress. Students of Duke University don’t do this alone – none of them do. [Parents] were part of this journey.”
-- Justin Clapp

Justin Clapp, director of the Office of Access and Outreach, emceed the event and noted that the students actually represented a larger group unable to attend. About 10 percent of the members of the Duke undergraduate student body do not have a parent who graduated from a four-year college.

The path has not been easy, Clapp said, as he acknowledged the families’ roles.  “It’s been four years of joy – and pain and stress,” he said. “Students of Duke University don’t do this alone – none of them do. You were part of this journey.”

John Blackshear, assistant vice provost in the Office of Undergraduate Education, told the crowd that the students in the room will become judges, elected leaders, keepers of tradition and those who will push for progress.

“In the words of the renowned ‘poet’ Bruno Mars, ‘If you don’t believe me, just watch,’” Blackshear said.

Students proceeded across the stage to receive their cords, while Clapp read their names, majors, hometowns, someone in whose honor they accepted their cords – and a sentence about their plans. 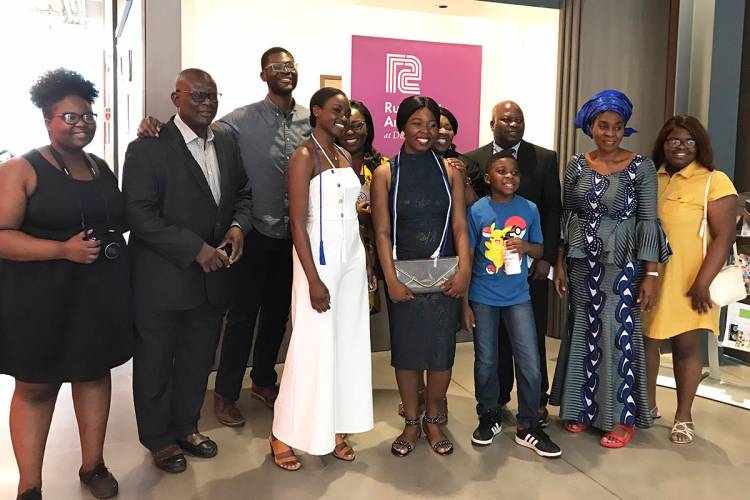 There were engineers, chemistry and math majors, as well as those who majored in biology, public policy and sociology. Some were off to jobs with Goldman Sachs and IBM; others will pursue graduate degrees in nursing or speech pathology.  Yet others – like many of their Duke peers – are still deciding next steps.

Damilola Oke ’19 from Nigeria and her friend Margaret Darko ‘19 from Ghana plan to go to medical school. The friends met during the Target run at orientation and grew closer over the years.

“(Damilola does a lot of work in the background and doesn’t get celebrated for it,” Darko said. “She’s a fighter – a quiet fighter.”

The two said they also were grateful for others they met at Duke. Dean Rachael Murphey-Brown helped Oke stay on track. “I almost transferred out freshman year because of costs -- and would have, if not for her,“ Oke said. “She was like a second mom and kept encouraging me.”

The event was as celebratory for the families and guests as the students. 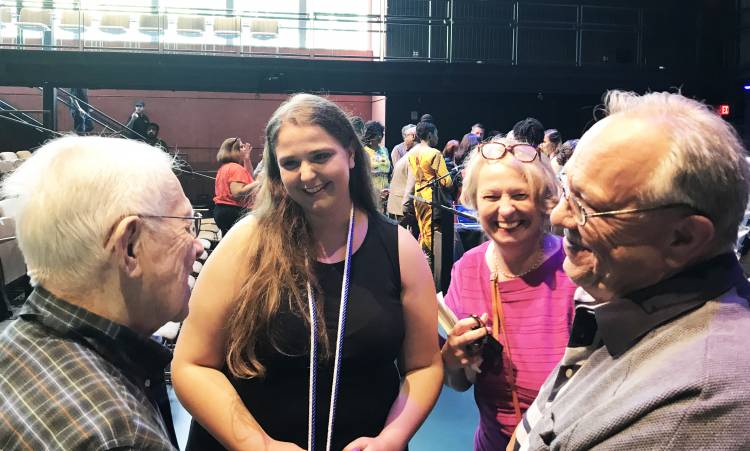 The parents of Haley Sink ‘19, from Thomasville, NC, said their daughter has always amazed them. “When she was eight-years-old, she knew more than I did,” said Keith Sink with a smile. “In high school, she’d get up at three or four in the morning to study.”

Gerald Wilson, Duke’s pre-law adviser and a popular history professor who has worked at Duke for more than 50 years, came over afterwards to congratulate Sink, who has received a scholarship to attend Wake Forest University’s law school.

“Haley is an absolutely amazing person and student,” Wilson said. “I could have retired years ago but I would have missed meeting Haley. Students like Haley keep me here.”

Going forward, the first-gens can look for support from Duke alumni, said Noor Tasnim ’18, Ubben Fellow for Students Programs in the Alumni Association. Tasmin, a first-gen himself, said he encountered many obstacles at Duke – especially at the start. An older Duke student helped him adjust to campus life  – and made him feel more confident.

“You’re leaving Duke,” Tasnim said. “But who’s going to be here for you – Duke alumni!”

What Do You Miss About Campus?