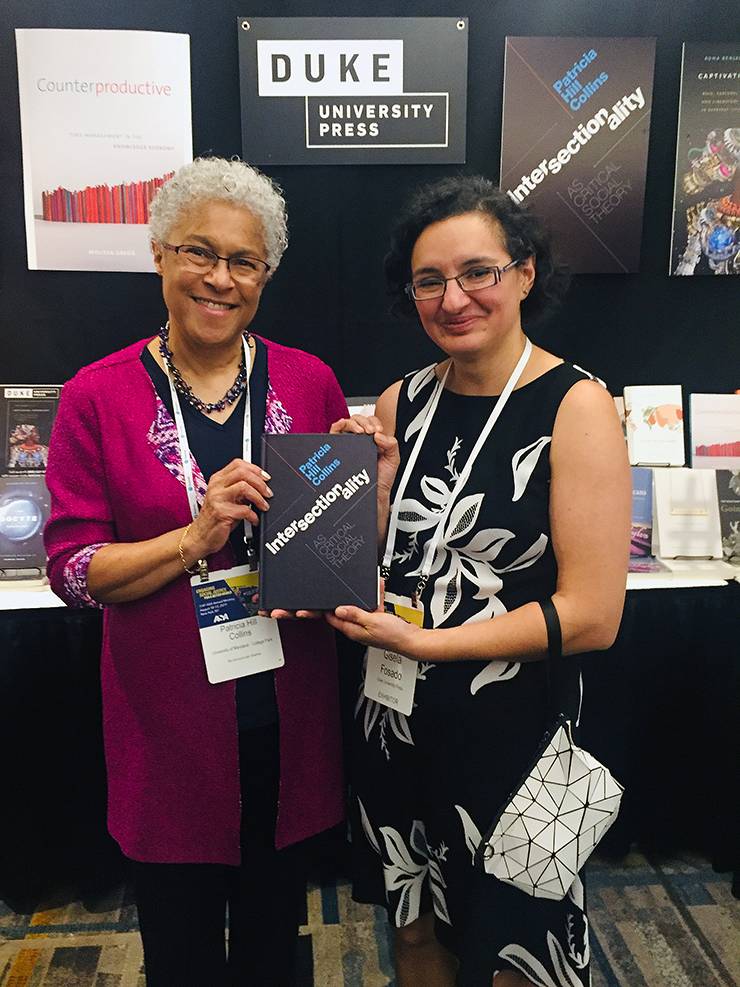 What she does at Duke: A core mission of Duke University Press is to bring bold, progressive work to general and scholarly audiences. Responsible for finding, sharpening, and reviewing around 30 of such works each year, editor Gisela Fosado plays a key role in helping make that mission a reality.

“I try to bring forward voices, stories, and histories that have generally been marginalized or haven’t been granted the importance that they should be,” said Fosado, who finds voices in a variety of ways.

Fosado reads many submissions from scholars to see if they could be something Duke University Press would publish. She also attends academic and publishing conferences to build relationships with potential collaborators. When an idea strikes her, she will often pitch it to authors.

Once Duke University Press takes on a book project, Fosado works with the author to refine the idea. And once a manuscript is complete, Fosado helps get it in front of experts who then review the work.

At every step, Fosado is fueled by the excitement of helping new ideas find a home on the page.

“I feel incredibly lucky to do what I do,” Fosado said.

What she loves about Duke: Fosado is especially grateful for her colleagues’ collective sense of curiosity.

“We’re a community of learners,” Fosado said. “I think there’s a general sense that we can all learn from each other.”

Fosado said this came into focus around three years ago when she co-founded Duke University Press’s Equity and Inclusion Interest Group, which meets regularly to discuss ways to diversify the voices and perspectives in publishing.

“We weren’t sure that anyone would show up when we scheduled that first meeting in the summer of 2016, but people attend month after month to work together on a number of equity and inclusion initiatives,” Fosado said. “I’ve learned an immense amount from my colleagues through that work. Members of our Interest Group, in fact, have become leaders in equity work across scholarly publishing. We hold regular book studies, film screenings, and we’re about to launch a mentorship program.  We’re lucky to have our new Director, Dean Smith, as a strong supporter of our efforts.”

Fosado also recently co-authored an essay on the subject of equity and inclusion in scholarly publishing.

A memorable day at work: The winding, and occasionally years-long process of turning an idea into a book culminates with delivery of the first boxes of the book itself. It happens several times a month, but it’s a thrill that never wears off.

“It’s exciting to see so much hard work come together to create this powerful object that circulates in the world, furthering our knowledge and understanding,” Fosado said.

Special objects in her workspace: In addition to photos of her partner, Nick, and daughter, Natasha, Fosado’s desk also features photos of her cats, which speak to her self-applied label of “crazy cat person.”

“The pictures remind me of how much I love the people – and other beings – in my life,” Fosado said.

First ever job: Growing up in Eugene, Oregon, Fosado once joined a fire-fighting crew battling blazes in the Cascade Mountains.

“It was an unforgettable experience,” Fosado said. “Most twelve-hour shifts involved cleaning up after the fires moved through an area, putting out the small embers to prevent a new blaze. But there were times where I worked at the head of the fire and that was intense.”

Best advice received: Fosado said that the best advice came from her mother.

“My mom continually emphasized that I could achieve whatever I wanted in life” Fosado said. “She taught me and continues to teach me the value of determination and resourcefulness. I’ve had many brilliant women as role models and teachers in my life and she’s at the top.”

How to Maintain Your Emotional Well-Being Using Virtual Resources