At PricePalooza Wednesday night, students rode on a Ferris wheel and danced until the lights went out. They also took part in 21st-century fun such as posting a specially created “Bitmoji” of Price to social media and taking selfies with Price (and with his dogs Scout and Cricket).

The food at both PricePalooza and at a recepton following Thursday's inaugural ceremony celebrated Duke’s Southern ties but also with a playful spirit: Fruit monkeys and an ice sculpture with sushi were popular at the post-inaugural reception in the Brodhead Center.

Popular arts had an important presence at all of the events. The inaugural ceremony began with the Duke Wind Symphony bringing in the procession with a flourish from Ralph Vaughn Williams, but there also was room for Broadway star and Duke alumnus Aaron Lazar singing Rodgers and Hammerstein’s “You’ll Never Walk Alone” from “Carousel.” John Brown and his “little” Big Band brought a touch of jazz to the event with Brown’s piece “Royal Blue,” composed in honor of the occasion. 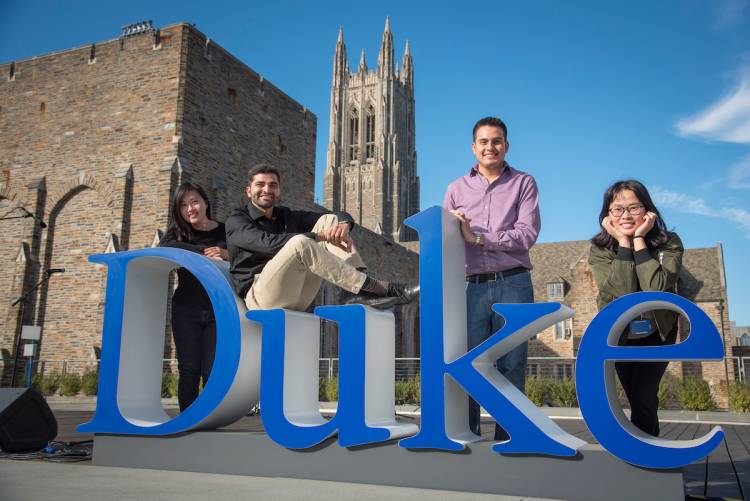 But it was through a faculty symposium earlier Thursday and Price’s inaugural speech where the university took note of the challenges ahead of Price and Duke. At the symposium, faculty talked of the challenge of communicating expertise on complex issues in a time when, said political scientist Sunshine Hillygus, “If public deliberation is the metric by which we measure success of our democracy, we are in big trouble.”

Price, himself a leading scholar of political communications and public opinion, acknowledged the challenge in his inaugural speech. “We live amid concerns about the sustainability of our trajectory, in light of pressures placed upon students and their families. We hear criticisms from those who believe that elite universities are a barrier to -- rather than an instrument of -- the democratization of knowledge,” Price said.\

For many of the 3,000 people who filled Abele Quad, this was their first Duke inauguration. But for former University Archivist William King, it was his eighth, dating back to when he snuck as a young boy into Hollis Edens’ inaugural in 1949.  King spent the afternoon greeting many old friends from Duke and sharing other inaugural stories, such as when a librarian stopped a student protest at Terry Sanford’s 1970 inauguration by stealing the batteries out of the students’ bullhorn.