Near humming 3-D printers in the Co-Lab Studio on West Campus, completed printing projects sit on a table, waiting to be claimed.

They’re all made of the same gray plastic, but the similarities end there.

Next to a bust of Darth Vader is a small sleeping dog. Nearby, there’s a Bart Simpson figurine, chess pieces and several vases. Scattered among them are harder-to-place objects.

The Co-Lab Studio in the Telecommunications Building is open to Duke students, staff and faculty. With the help of the Co-Lab Studio staff, you can make your creations reality.

Chip Bobbert, digital media and emerging technologies engineer for the Office of Information Technology, runs the lab and can identify most of what’s on the table: A cluster of cylinders is a coin sorter. That knobby, curving mass is a reproduction of a human jawbone. When he picks up a foot-tall, hollow object that tapers at the top, he looks puzzled.

“I get excited when I see something sitting out there and I don’t know what it is,” Bobbert said. “Maybe it’s nothing. But maybe that’s a potential solution to one of the problems that
are out there.”

Since opening in 2015, the Co-Lab Studio has been where many of the Duke community’s ideas – both weighty and whimsical – have become gray plastic reality. The lab features around 60 3-D printers, some simple enough to handle Darth Vader and others sophisticated enough to turn diagnostic medical images into detailed renderings of human organs.

Using computer-aided design software and the lab’s online interface, Duke community members are invited to use the machines. More than 1,000 unique users printed nearly 20,000 jobs in the Co-Lab’s first year.

From solving problems to finding new ways to braid fun with learning, Duke faculty and staff have joined students in being led to the lab by curiosity. 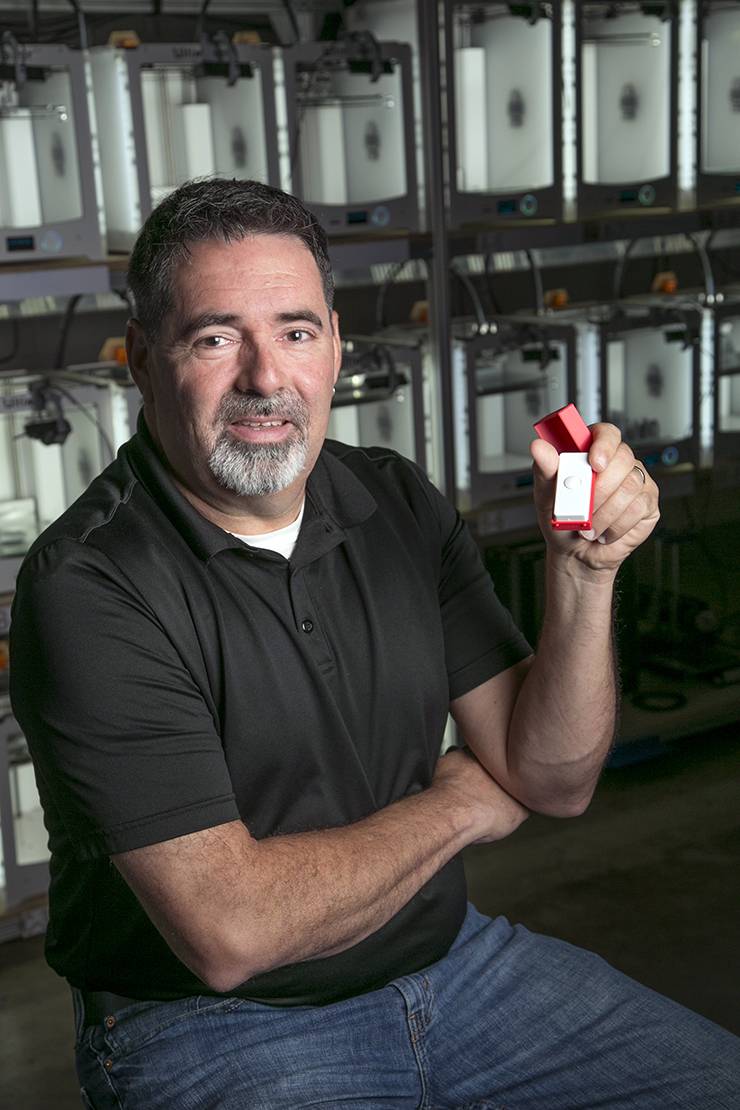 The objects that biomedical engineering professor Kevin Caves prints a few times a month aren’t flashy: a cylinder with holes and a small two-piece box.

They may not look like much, but as elegantly simple solutions for the often-overlooked problems people with disabilities face, they capture the beauty of the lab in a way
few other items can.

With the lab, Caves was able to perfect the cylinder with holes so it could help a non-verbal patient hold a laser pointer to communicate.

Now when he visits ALS patients, Caves often hands out the other item – a small box, which, when snapped around a standard store-bought doorbell, becomes an easy-to-use and potentially life-saving alert system.

Before coming to Duke, Caves worked at rehabilitation hospitals, designing, building and delivering devices to help people with disabilities. He said he wouldn’t be able to create the cylinder
and small box without the lab.

“I probably would have had to get metal or plastic stock and taken it into a machine shop and bored out the holes for it,” he said. “That would have really been challenging.”

While the Biomedical Engineering Department has a few 3-D printers, Caves recommends his students experience the lab. It’s got the volume to handle their needs, a student staff to offer guidance and machines that allow them to chase creativity wherever it leads. 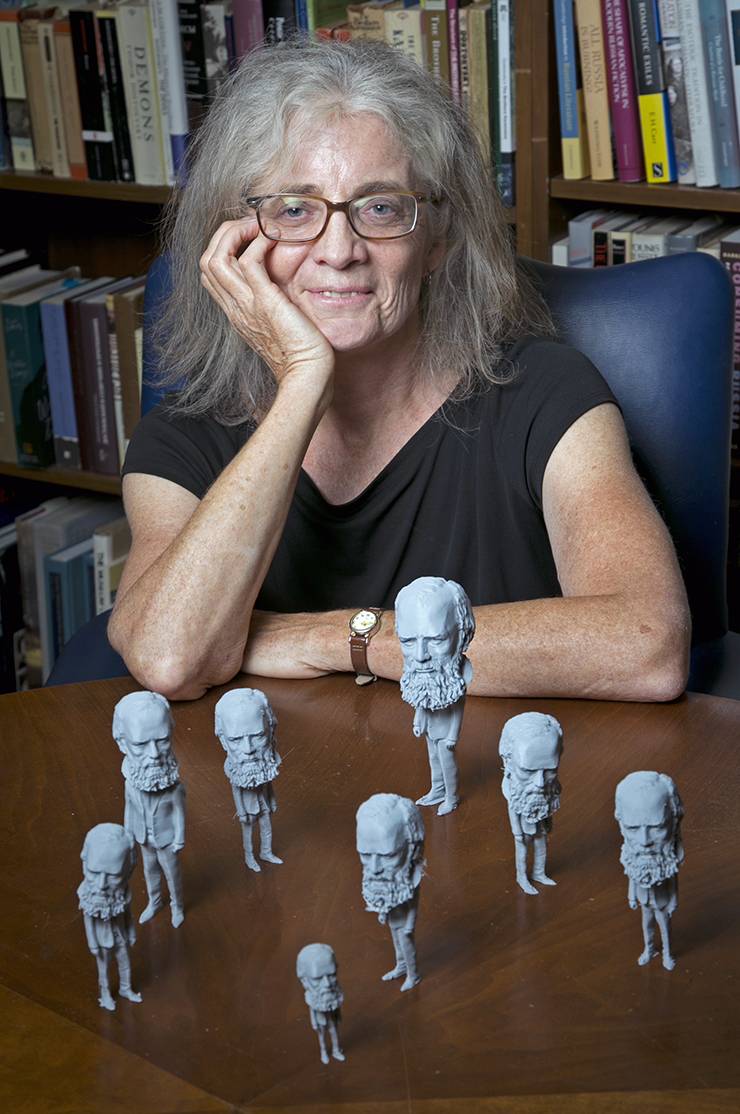 Last year, Carol Apollonio, professor of the practice of Russian in the Department of Slavic and Eurasion Studies, heard a colleague discuss a Co-Lab Studio showcase.

“You know, they can print anything,” the colleague told her.

At the time, Apollonio was planning the Dostoevsky Games, a student competition based on the life and work of 19th-century Russian novelist Fyodor Dostoevsky.

To strike the right, slightly irreverent tone for the event, she knew she needed
a symbol. While listening to her colleague, she realized she may have just found it.

“Could they print action figures from Russian literature?” Apollonio asked.

Not long after that conversation, Apollonio visited the lab and asked the staff if her idea was feasible.

“It was so exciting to realize that they were open to let people use these things for other areas,” Apollonio said.

After finding a design for a Dostoevsky bust online and a suitable body design to put it on, Apollonio went forward with her idea.

“Everyone in my field would recognize him immediately,” Apollonio said of the figure. “It’s a very good likeness.”

When the event rolled around in late March, the winners of the competition each took home their own small Dostoevsky, and Apollonio got a souvenir that still makes her smile. 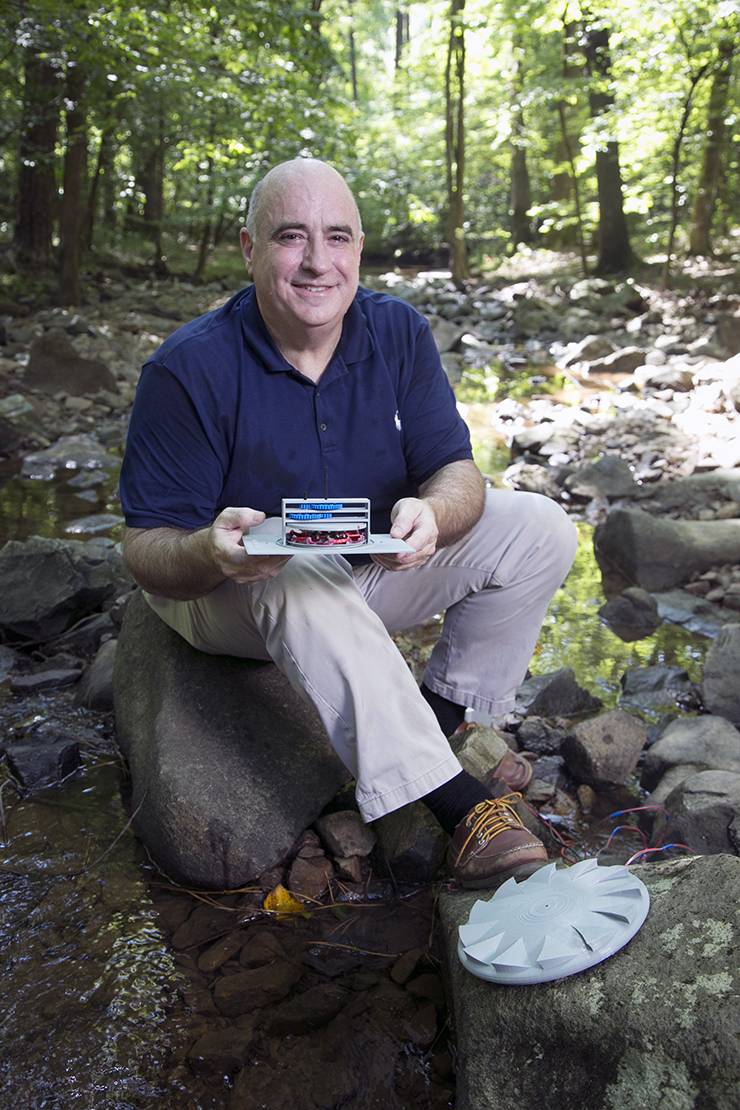 Designed as a portable way to turn the flow of a creek into electricity, Hubbard admits the design of the current model’s turbine still needs work.

“Right now, it’s a conversation piece,” Hubbard said of the mass of gray plastic shaped like a very large mushroom.

A lifelong inventor and tinkerer, Hubbard isn’t done with it.

As an adult, he developed a machine that printed photos on magnets and a portable speaker system for online music. Now, as a clinical informatics architect, Hubbard brings his creative spirit to the data management structure of Duke University Health System.

Fascinated by alternative energy sources, the Co-Lab Studio helps bring his ideas closer to reality by allowing him to make parts he couldn’t create any other way.

Hubbard learned how to use the printers on the studio’s website and took design courses on Lynda.com, a tutorial site that’s free for Duke employees. Last winter, he started designing the project on his home computer and printing parts in the Co-Lab.

“To me, innovation is a combination of resource, opportunity and inspiration,” Hubbard said. “The Co-Lab provided the resource and the opportunity. All we – the Duke community – have to do is provide the inspiration.”