The awarding of the 2026 World Cup soccer tournament to the US, Mexico and Canada – as  joint North American hosts – is among other things a counter to current strains of American isolationism, a Duke expert says.

“For the many soccer fans in the country who see the sport as a positive force that connects us to the broader world, this presents an opportunity to push back against currents of isolationism,” said Laurent Dubois, a professor of history and Romance Studies. “Especially since the tournament will be hosted in collaboration with our neighbors to the south and north.”

The announcement Wednesday by soccer’s global governing body, FIFA, means the US will share hosting duties with Mexico and Canada in 2026; this will be the second time the USA hosts soccer’s largest and most popular tournament. It first did so in 1994.

“For the many soccer fans in the country who see the sport as a positive force that connects us to the broader world, this presents an opportunity to push back against currents of isolationism.”
-- Laurent Dubois 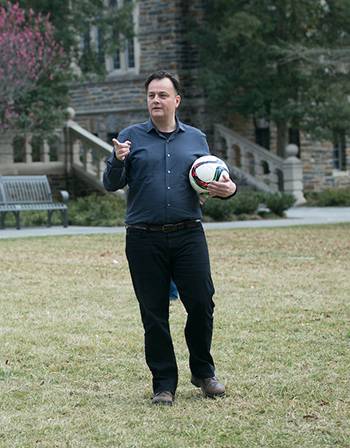 “Whatever happens over the next eight years, this is clearly a hugely transformative moment in the history of soccer both in the U.S.,” said Dubois, who teaches a popular Duke course about soccer and its place in the world. “The hosting of the 1994 tournament in the US, after all, was a turning point in the expansion of the game here.”

Dubois teaches “Soccer Politics,” which looks at the game’s historic and contemporary impact on global language, culture, politics and life. He is also the author of the recently released book ‘The Language of the Game: How to Understand Soccer.’
While previous World Cup tournaments have been jointly hosted – like in 2002, when Japan and South Korea joined forces – the 2026 version will be particularly challenging given the sheer geographic vastness, Dubois said.

“The tournament will be huge, stretching across a larger geographical area than any previously held,” he said. “While the basic logistics in terms of stadia and accommodations are in place — which was one of the strong points of the bid — the hosting of the tournament will raise many other logistical questions, notably about travel back and forth across the border to Mexico.”

Some Duke employees improve their health during distancing and unpredictable times