What he does at Duke: The patients who come to see Lodge were born with flawed hearts. Often, these defects can be fixed with surgery. But the kinds of surgeries Lodge must perform can vary.

He will operate on infants and children born with serious heart problems and, with heart defects occasionally going undetected for years, it’s not uncommon for him to surgically repair congenital defects in adults. Sometimes, he’ll operate on patients more than once, adjusting fixes that they’ve outgrown or performing a series of planned staged surgeries.

While his job is filled with high-stakes challenges, he said seeing a patient go home with a healthy heart never gets old.

“That is very gratifying,” Lodge said. “We can sometimes get used to doing this because it’s our job, it can become routine. But for these people, it’s not routine. When you’re reminded of that, it’s extremely meaningful.”

What he loves about Duke: After graduating from the Duke University School of Medicine and spending time as a resident at Duke University Hospital, Lodge has a deep history at Duke long before he joined the faculty in 2003.

He’s come to appreciate the Department of Surgery’s Division of Thoracic and Cardiovascular Surgery for its size and camaraderie.

“It’s big division, there’s a lot of people,” Lodge said. “It’s academically stimulating to work with so many very accomplished people. And the institution as a whole is like that. There are so many smart and interesting people around here.” 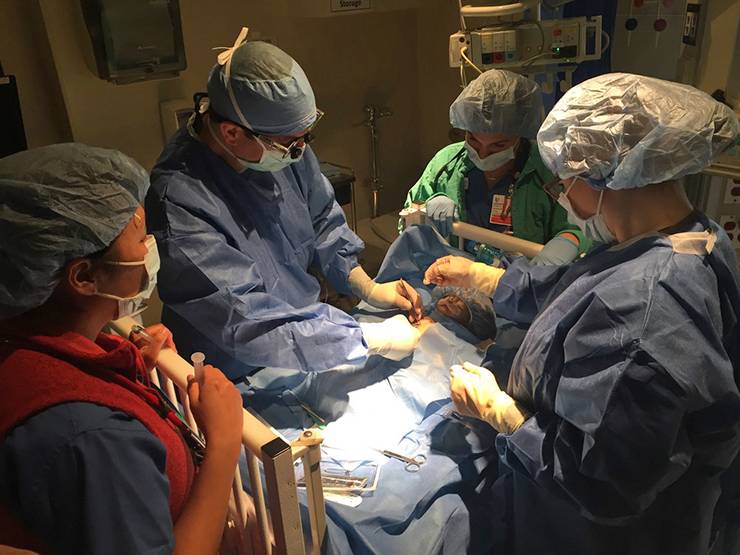 A memorable day at work: Earlier this year, Lodge performed what may be his best known surgery to date. The procedure involved a 5-year old patient who was born with a heart defect that required surgery for her to survive.

But it was the surgery Lodge did on the girl’s doll that went viral.

Lodge had done a similar doll surgery in 2016, but the more recent one came after a patient requested that her doll have a similar scar to the one she had after her own open heart surgery. Lodge agreed to do it and, with the help of colleagues who created a simulated ICU, the patient got photos and videos of her doll undergoing the procedure.

“It was fun, the staff had a really good time with it,” Lodge said. “There are days when it’s really rough here. You take care of sick babies and kids and not everything turns out the way you want. But days like that, when you can have fun with it, do stick out.”

A special object in his workspace: Lodge was given the Presidential Award, one of Duke’s highest honors, earlier this year for his contributions in 2017. In addition to a medal, he received a copy of the letters colleagues wrote supporting his nomination. He keeps the letters in his desk drawer.

“As I read through it, it was very emotional to hear people say such nice positive things about you,” Lodge said about reading the notes. “On a day-to-day basis, you don’t hear that stuff. And it’s a stressful job, there are ups and downs. To see that on paper and in black and white, it was very meaningful.”

First ever job: Growing up in Ewing Township, New Jersey, Lodge spent his mornings delivering issues of the local newspaper, The Trentonian.

“I’d fold up the papers, get on my bike and throw them on the front porch,” Lodge said. “From then on, I always had a job of some kind. I think it started teaching me about responsibility. I had to get these papers out every day. It didn’t matter if it was raining, or snowing or if I didn’t want to get up every day. I had to do it.”

Something most people don’t know about him: While many of his neighbors hire companies to mow their lawns, Lodge said he’s stubbornly resisting making a similar move. During his free time, he said he enjoys cutting the grass around his Durham home and doing yard work.

“I find it stress-relieving,” Lodge said. “It gives you some sense of accomplishment to make your yard look nice. It gives you immediate feedback. So that’s one thing I’ve held on to.”