While her white lab coat speaks to her current position at Duke, where she’s an assistant professor of surgery and a surgical oncologist, her height and calm confidence hint at the role she played here two decades ago.

Back then, Beasley – then Georgia Schweitzer – was an All-American guard for the Duke women’s basketball program. Twice named Atlantic Coast Conference Player of the Year, she helped push Duke to the brink of a national title.

“It’s an easy way to connect,” Beasley said of her hoops past. “Especially around here, where everybody loves basketball.”

Beasley is part of a small circle of employees who once represented Duke as student-athletes. While the ways they contribute to Duke have changed, the time they spent as Blue Devils give them a unique perspective of where they now work. 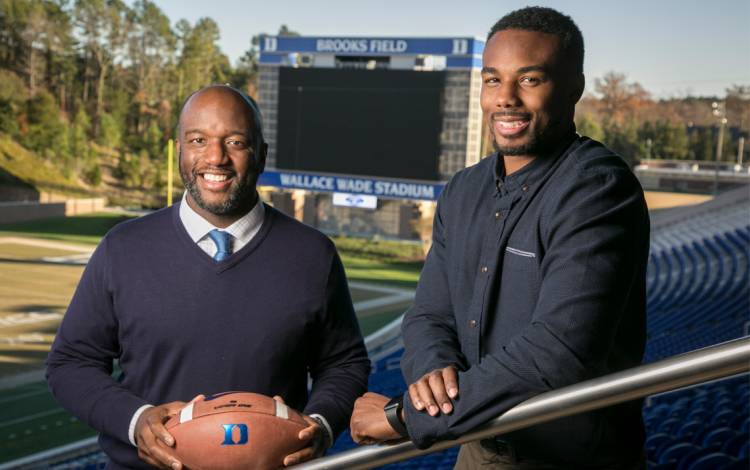 As coordinator of administrative operations for Duke Athletics, DeVon Edwards is learning things fast. From organizing donor spreadsheets to arranging travel and setting up meetings, the former Duke Football All-American is getting a comprehensive look at how athletics departments operate. 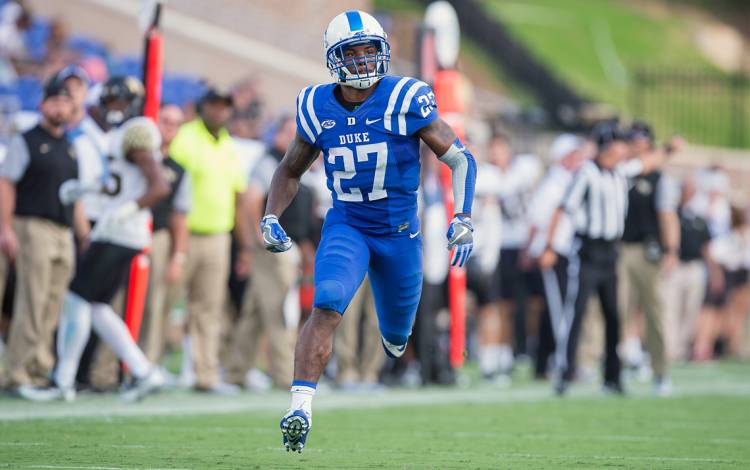 The seed for Edwards’ athletics administration career was planted years earlier, when he interned in the athletics department. It took root last spring, when Edwards suffered his second knee injury in two years while training for a potential spot on a pro roster.

After making the difficult choice to leave playing football in his past, Duke welcomed Edwards onto its staff.

“I had to make this decision on my own, and I’m glad I did,” Edwards said.

Troy Austin, senior associate director of athletics for internal affairs, works with Edwards on the third floor of the Schwartz-Butters Athletic Complex. Austin, a defensive lineman for Duke in the late 1990s, can appreciate the loyalty Duke showed Edwards. He’s experienced it himself. 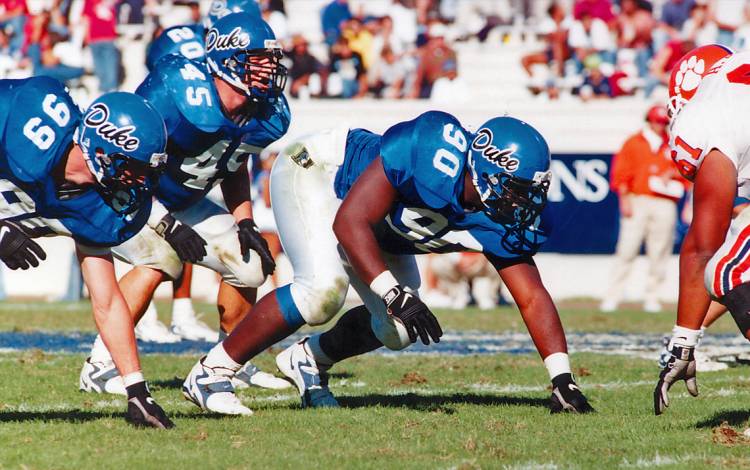 Years earlier, Austin’s decision to attend Duke delighted his mother, Joyce. A high school home economics teacher, she valued education and saw the possibility of a Duke degree as a prime selling point.

Joyce never saw Austin play at Duke. During her son’s first fall in Durham, she died after a battle with breast cancer.

Austin recalls being overwhelmed by emotions after losing his mother and the stress of adjusting to new academic and athletic pressures. But he also remembers the support of his teammates and coaches never wavering.

“They let me take a breath,” said Austin, who recently returned to Duke after 12 years as athletics director at Longwood University. “I struggled that first semester, but Duke and its people had patience with me and pushed me to get better. “For such a competitive environment, it amazes me how caring and supportive everybody is here.” 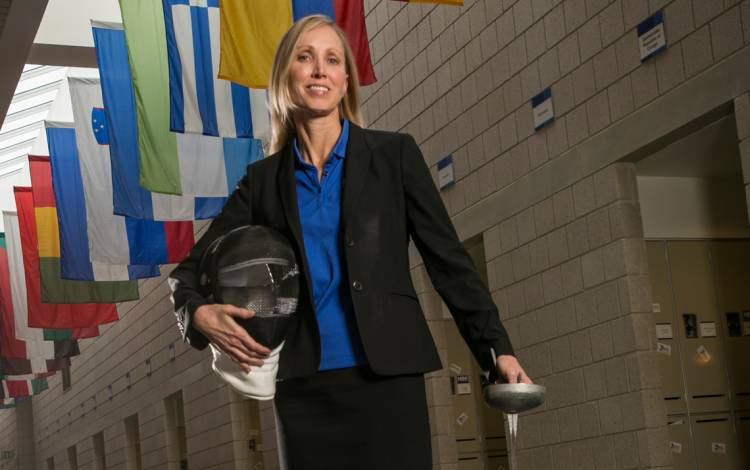 When she arrived at Duke as an undergraduate in 1985, Leslie Marx, now the Robert A. Bandeen Professor of Economics at the Fuqua School of Business, hadn’t thought much about fencing.

But after seeing a fencing demonstration by Duke coach Alex Beguinet – meant to attract first-year students to his fencing class – she was enchanted. 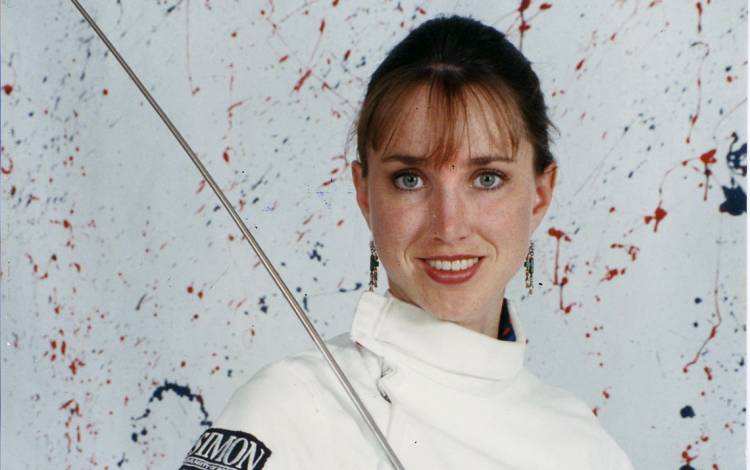 “I like that you’re in a fight,” said Marx, who spent two years fencing for Duke. “It rewards strategic thinking, which I like. You’re trying to predict what your opponent is going to do, set up deceptions and feints, and try to anticipate their strategy.”

While many student-athletes arrive at Duke with the passion for their sport already burning, Marx’s love of fencing didn’t blossom until she got here. And once she left, it carried her around the globe.

Marx continued to train and compete while earning two graduate degrees at Northwestern and spending eight years on the faculty at the University of Rochester. In 2002, she joined the faculty at Fuqua, where she studies game theory and strategic interactions between firms.

Along the way, she became one of the country’s top competitors in the epee, a fencing discipline that rewards strategy and patience. She won gold at the Pan-American Games in 1995 and represented the United States in the 1996 Olympic Games.

She’s still deeply involved in the sport, serving as a volunteer assistant coach at Duke and winning her age group at the Veteran World Championships in 2017.

“It’s the strategic thinking,” said Marx. “It’s fascinating to me whether it’s in business or if it’s in fencing.”

Whether meeting with Duke graduates or working with colleagues to plan reunions, Lauren Rice finds plenty to enjoy
as Duke Law School’s regional director of development.

But her unofficial role as social director for local Duke women’s basketball alums is every bit as fulfilling. 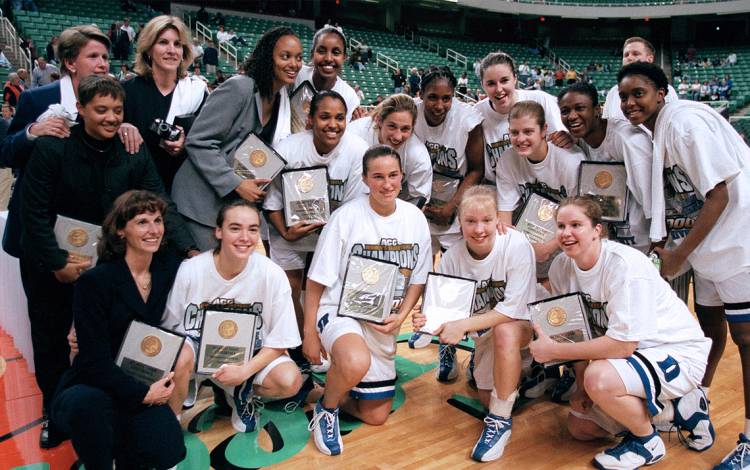 “I have great colleagues in the working world, but in basketball, it’s different,” Rice said.

College teammates travel, train and compete together, enduring exhilarating highs and crushing defeats. The bonds created by these experiences, Rice said, are unlike anything else.

When former teammates swing through Durham, Rice shoots texts to a network of former Blue Devils, hammering out details for how those connections can be revived. Included in those texts are former teammates Krista Gingrich and Georgia Beasley, who, like Rice, keep their ties to Duke strong.

Gingrich, a graduate of Duke’s Physician Assistant Program, has been an orthopaedic physician assistant at Lenox Baker Children’s Hospital since 2010.

Beasley, who attended Duke University School of Medicine after serving as a Duke women’s basketball assistant coach and playing three seasons in the WNBA, has been a Duke faculty member since 2017.

“When we get together it’s as though no time has been lost,” Gingrich said. “There’s just that bond. We still retell the same stories. And they’re still great.”

Inside the Planning for a Pandemic