The last time members of the Duke University Police Department’s Citizens Police Academy saw Tammy Boseman, she had arrived at her workplace a few weeks ago to find a window broken, a door ajar and a crime scene waiting inside.

“I was actually pretty calm,” said Boseman, who patiently explained to academy participants what she’d seen, which was all part of a training exercise.

Back among many of the same people at Friday afternoon’s graduation ceremony of the Citizens Police Academy, Boseman smiled as she thought back to that day's burglary simulation as part of the academy.

“It was wonderful,” Boseman said, recalling her role in the simulation. 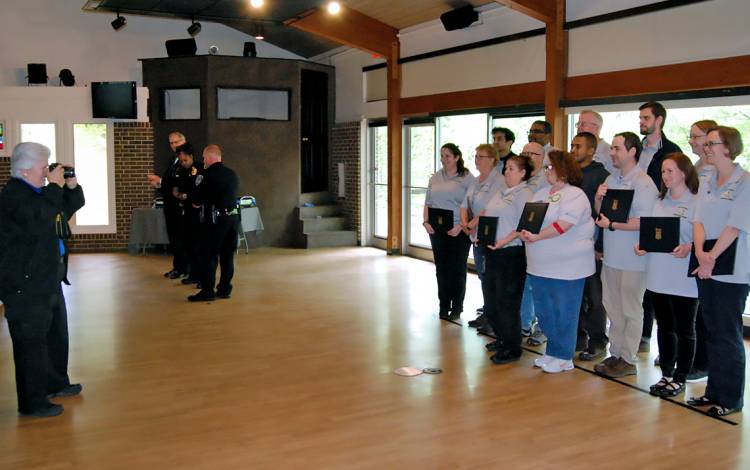 Over the past few years, Boseman, a senior staff assistant with Duke’s Center for the Study of Aging and Human Development, took part in two rounds of the Citizens Police Academy. This spring, she returned to help, volunteering to play the role of a witness during an exercise built around the simulated crime scene.

And on Friday, her affection for the program brought her back to celebrate another group of graduates.

“I just love the camaraderie,” Boseman said. “It’s wonderful. If I could do it all over again, I would.” 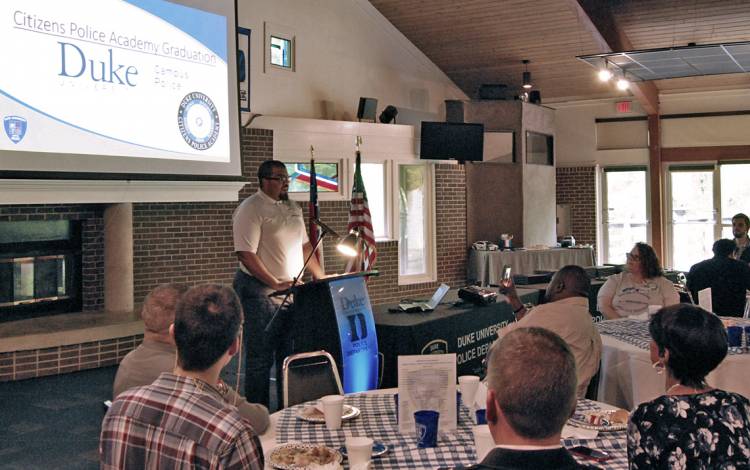 While many of the sessions of the police academies provided hands-on learning opportunities about active shooters, drunk drivers, self-defense and the complex decisions law enforcement officers make on a regular basis, many academy graduates say that the major benefit of the experience is the lasting bonds among participants and officers.

“We’re really honored that you chose to spend some time with us,” Duke Police Chief John Dailey told the group. “I hope you learned more about us, but more importantly, I hope you were able to establish some relationships with each other and also with the officers.”

“This just brings a lot of people together,” he said.

That family was back together on Friday as members of the Duke University Police forces and former Citizens Police Academy participants, such as Boseman, showed up to support the new class of 41 graduates.

“You just have a greater appreciation of the job they do,” said Barbara Pollock, who completed the Citizens’ Police Academy after recently retired from Duke’s Sanford School of Public Policy. “It was a great time.”

Each scholarship provides up to $7,000 for the scholar’s junior or senior year