Speaking to a crowd of several hundred people spread among the pews of Duke University Chapel, Dean Taylor spoke about fellow veterans who embodied the unyielding desire to help others.

“Today let’s remember examples of selfless service from the military because they translate to medicine, they translate to education, they translate into all walks of life,” said Taylor, who spent 24 years in the United States Army. “We can learn from and honor those who have served and sacrificed.” 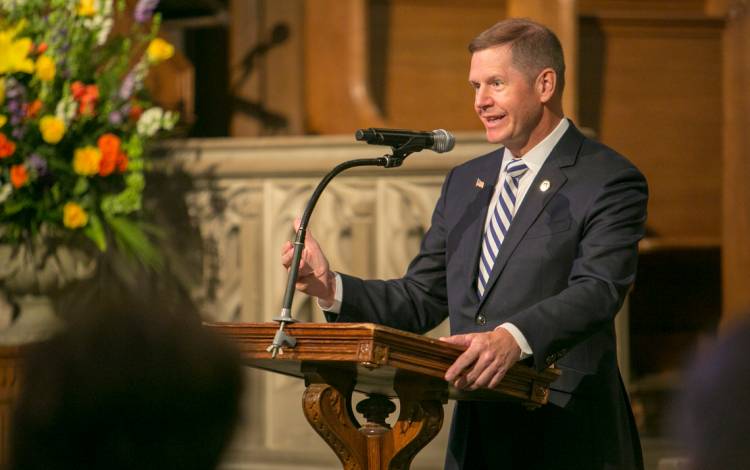 Taylor, a professor of Orthopeadic Surgery with Duke University School of Medicine and a graduate of the United States Military Academy at West Point, served as the keynote speaker at Monday’s Veterans Day ceremony and is one of about 860 staff and faculty members  who identify as veterans at Duke.

On Monday, Duke honored their service with a ceremony that began in Duke Chapel and finished under blue skies at the Memorial Wall a few steps outside.

Enjoy scenes from the ceremony as well as some reflections from attendees. 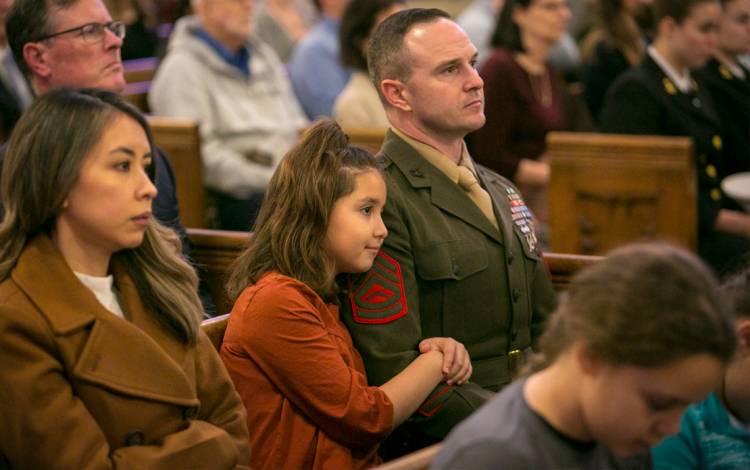 Gunnery Sgt. Robert Weinhardt, the assistant officer instructor for the Duke Naval ROTC, attended the event with his wife, Sindy, and two children, Isabella and Thomas.

“We’ve gone through a couple of deployments and spent a lot of time away from home,” said Weinhardt, who’s served in Afghanistan, Venezuela, Ecuador and several other countries. “To be back and celebrate this with them was special.”

Weinhardt came to Duke in April and said events such as these highlight the university’s welcoming attitude toward veterans.

“Any time a university or organization like this takes the time to remember veterans and their sacrifices, it’s great,” Weinhardt said. “It hits you in the heartstrings. It was awesome.” 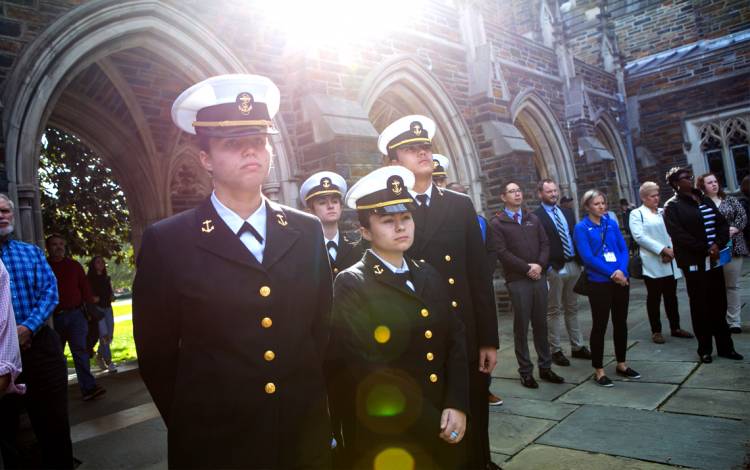 At the beginning of his remarks, Taylor asked all of the veterans in Duke Chapel to stand, so they could be recognized. Upon his request, nearly half of the attendees rose to their feet as applause echoed off the arched stone walls.

“I knew that there were a lot of veterans in the workforce here, but it was great to see so many congregated in such a beautiful place,” said Paul Dillon, a Vietnam veteran and the Accenture Visiting Professor of the Practice at the Sanford School of Public Policy. “It’s wonderful to see people coming together to get a sense of camaraderie and fellowship.”

While the event is meant to show Duke’s appreciation for those who served, it also provides veterans an opportunity to connect with one another.

“I think it means a great deal that Duke takes time to recognize veterans, not just on campus, but throughout the entire community,” Dillon said. “All of us who served and have a connection to Duke are very appreciative.” 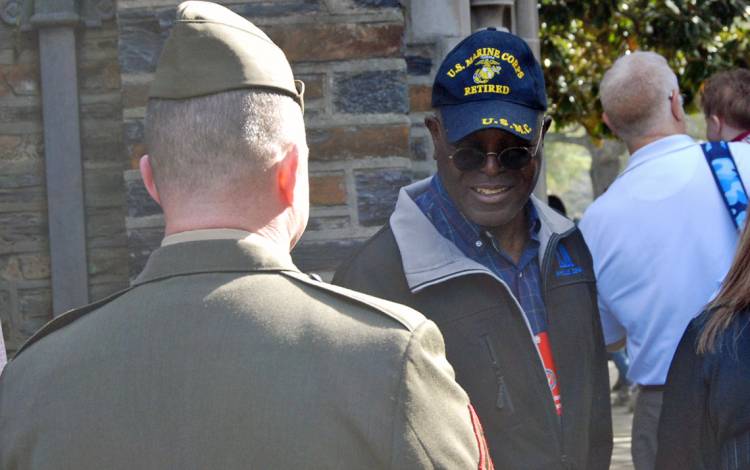 Roland Falana, the general manager for office products and services at Duke University Stores, stood outside Duke Chapel and watched the ceremony finish at the Memorial Wall.

Falana spent 20 years in the U.S. Marine Corps, serving in 22 countries before retiring in 1992. He’s worked at Duke for 20 years.

“It feels great,” Falana said of the ceremony. “It feels great that Duke provides this service. It’s nice to see so many people participate.”

He said that Taylor’s remarks about how values learned in the military can serve as effective guiding principles in other phases of life resonated with him.

“(In the Marines) we learn teamwork and leadership, and that can all be applied here at Duke,” Falana said. “It was very easy for me to transfer from the military to the civilian world.” 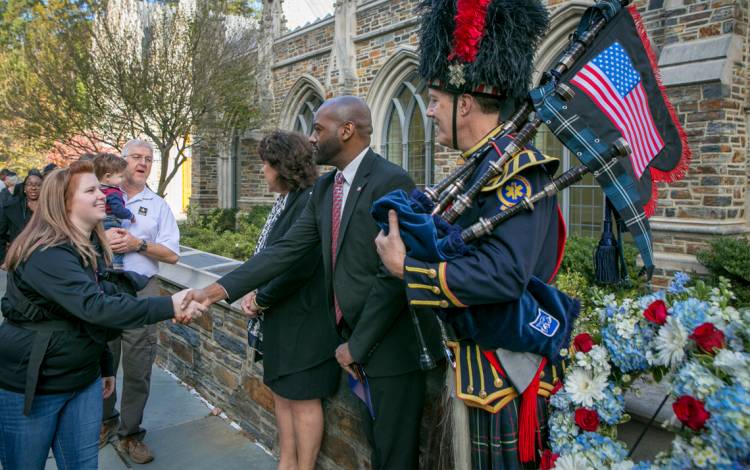 Monday’s ceremony began with music and an invocation from Assistant Dean of Duke Chapel Bruce Puckett. It concluded with the laying of a wreath by Assistant Vice President for Staff and Labor Relations Antwan Lofton and Associate Vice President for Alumni Affairs Sterly Wilder at the Memorial Wall.

“We will very shortly go back to our fast-paced never-ending lives doing what we do here at Duke,” Duke Vice President for Administration Kyle Cavanaugh said near the end of the ceremony. “But I would ask each of you, during the course of the day, to take a moment and reflect on how fortunate every one of us is to live in this country and have the benefits of freedoms that we sometimes take for granted on a day-to-day basis. It’s the sacrifices that these men and women made for us that allow us to live the lives we do. For that, we’re eternally grateful.”

Defending Her Dissertation, at a Social Distance