As 5 p.m. approached on a recent Wednesday, a mass of Duke students stood outside the front door of the Marketplace on East Campus, waiting for the annual Thanksgiving dinner to begin. When the doors opened, hungry students streamed in, some pausing to marvel at desserts that filled a table, and others rushing to grab prime seats for the epic meal.

Each year, the dinner before the week of Thanksgiving, gives the staff of the Marketplace, which is part of Duke Dining, a chance to show off both their cooking skill but also their mastery of logistics. Around 1,600 diners visit for the meal, which requires large amounts of food and effort. This year, staff prepared 400 pounds of mashed potatoes, 40 turkeys, enough green bean casserole for 25 gallons of mushroom sauce and 12 kinds of bread.

"If we weren’t hyper-organized and really had our stuff in a row, there’s no way we’d pull this off,” said Mark Turner, executive chef and menu development specialist for the Marketplace. “It takes serious forethought to do this, but we are proud of what we do, and we want to make it as nice as we possibly can for the people that come here.”

While few of us will ever cook a meal this big, odds are at some point we’ll undertake projects that seem just as daunting. For those instances, it’s worth taking a look at strategies the Marketplace staff uses for its annual Thanksgiving meal.

Set Milestones for Each Day 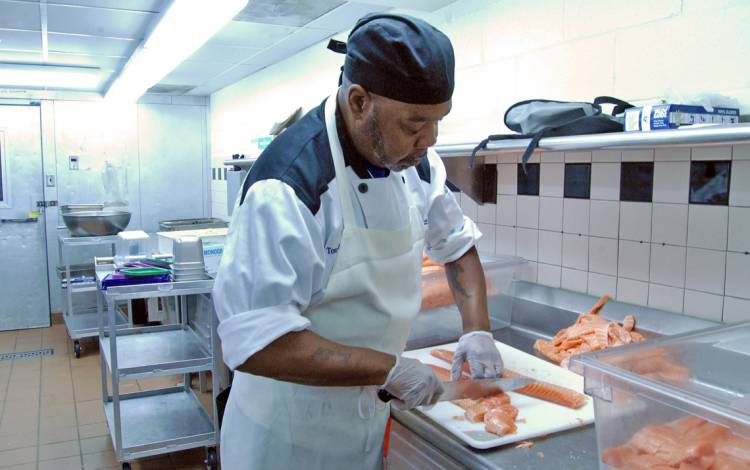 When taken all at once, the amount of work involved in putting on the meal can seem overwhelming, which is why work is spread out over several days with specific tasks tied to each day.

To ensure things move forward, the staff sets up multiple deadlines for manageable chunks of work, instead of focusing on one overarching Wednesday deadline for the entire project.

So, on Sunday, among other things, the staff must get frozen turkeys thawing, quinoa salad prepared, and make clarified butter which will eventually go on grilled lobster tails.  On Monday, chicken salad must be made, salmon has to be skinned and portioned and butternut squash needs to be roasted for use later in risotto. And Tuesday will have the staff make pumpkin soup, chiffonade two cases of kale and make turkey stock for gravy and stuffing.

“We know what we need to have done each day,” Turner said. “I’ll know on Monday afternoon, if I leave here and we’ve already started Tuesday’s list, we’re good.” 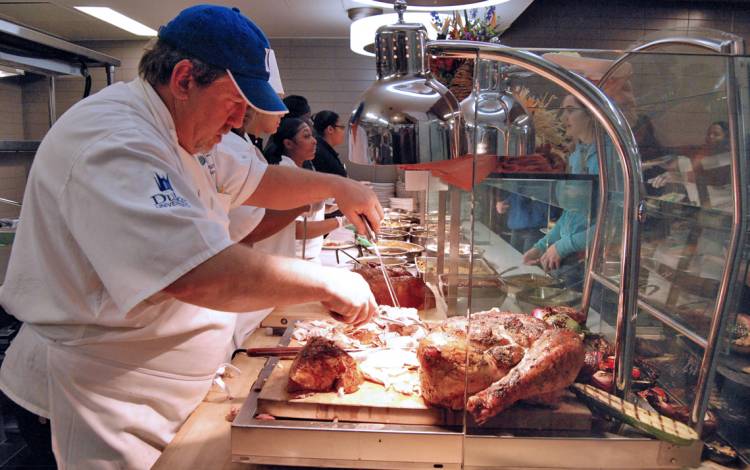 According to Executive Sous Chef Todd Dumke, the first step in preparing for the 2019 Thanksgiving meal came immediately after the 2018 version wrapped up. That was when Dumke and his colleagues took comprehensive notes on the just-completed meal, recording how much food was ordered, how much was left, how smoothly the preparation and service went and other details such as the weather and what else was going on across campus.

“That kind of stuff matters,” Dumke said. “It affects when people show up.”

When tackling a regularly-occurring project, keeping notes on each edition can prove helpful. Dumke keeps food orders, menus and post-meal notes on all of the major Marketplace events, giving the team a valuable body of knowledge to draw from.

“Literally everything is on paper beforehand,” Dumke said. “We can look back and that and say ‘Hey, this didn’t work last year.’ We have all of this stuff to cross reference.” 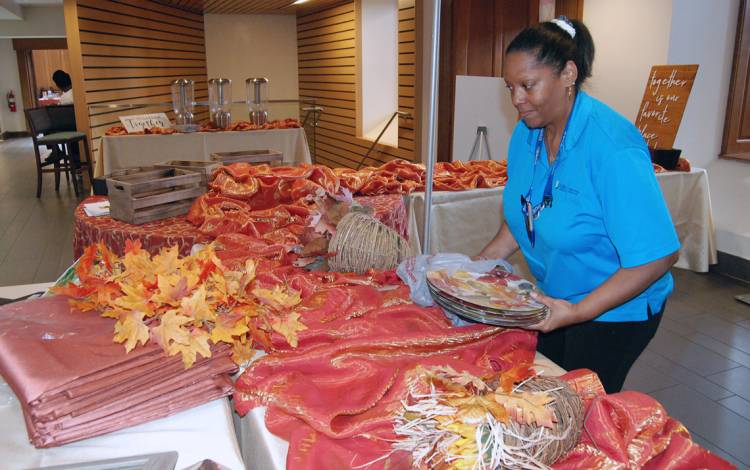 Hours before the doors open, Food Service Manager Beverly Fullard makes sure sheets of orange crushed velvet spill across tables with perfectly placed ruffles. She also arranges fall-themed decorations and trays that will hold slices of pumpkin pie or chocolate cake according to a diagram she and her colleagues designed weeks earlier.

While Fullard has been doing this for 33 years, her plans are always fluid. She said that when her team is figuring out how to lay out displays of food that diners will serve themselves from, she talks to fellow staff members to get feedback for what can be done better.

“I ask the staff, ‘How is this going to flow for you? What is going to make your job easier?’” Fullard said. “Each year we build on the plan, what worked, what didn’t work and how we can change it. Every year, something changes.”

While it’s important to lean on experience when tackling any project, it’s also important to avoid falling into a rut. Don’t be afraid to embrace change or listen to other perspectives. Those new ideas can sometimes result in better ways to get the job done. 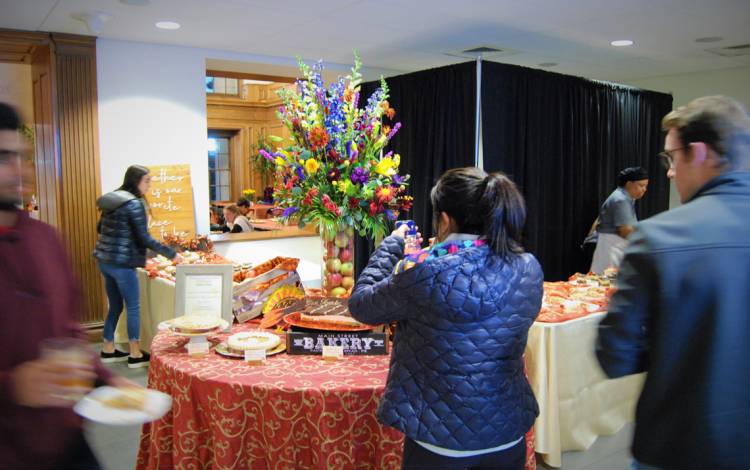 While a menu that features seven entrees, five sides, five desserts, three salads and two soups shows that the Marketplace team has expansive ambitions, the space in the kitchen and size of staff present some limitations.

The staff recognizes what it can’t do and gets help where it can. As with any project, it’s important to know when you need to call in reinforcements to use your time and resources efficiently.

For instance, for the Marketplace meal, some of the breads and desserts are prepared by outside vendors. And Duke Dining partners with a local barbecue cook to assist with roasting the 40 turkeys on his large, portable smoker.

Check out our story from the Thanksgiving meal on the Working@Duke Facebook page:

A Home Away from Home for 20 Years