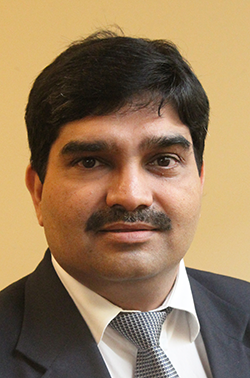 When families in India began scouring their communities for oxygen in late April, a Duke alumnus living in India sprang into action to help save countless lives.

Anil Kumar Bhardwaj, a 2015 graduate of Duke’s Master of International Development Policy (MIDP) program, developed an oxygen management system that provided thousands of people in his district of Faridabad with easier access to oxygen filling stations. By calling a toll-free number or filling out a Google form, residents submitted their requests for an oxygen tank refill. Once the request was approved, they were given a digital token, along with instructions on where to refill their tanks.

“Oxygen stations are not like gas stations—there isn’t one at every other crossing,” said Bhardwaj.

“We realized there was chaos at the refilling stations,” he said. “By the time you reached an oxygen filling station, there were a thousand people there, and it wasn’t certain that you were going to get a refill. Furthermore, when you have a refilling station with long lines, you’re creating a super spreader environment.”

Bhardwaj quickly formed a partnership between his local self-help group that assists marginalized communities and his alma mater J.C. Bose University of Science and Technology, YMCA. They began working together to fill requests for medical assistance. “There were frantic calls to our network between April 27-29. We had five cylinders that we were using to provide oxygen, but even our cylinders were sitting empty.”

Recognizing the gravity of the situation, his team approached local government officials. “We realized that district leaders did not have a sense of the scale of the problem and what to do. When we talked to the district administrator, she heard us and asked what we could do to help.”

“We did something very simple,” said Bhardwaj. “While it is very jazzy to say I’ll create an app, we needed a different solution. At first, we created a Google Form. Since some people don’t have access to the Internet, we set up a toll-free number.”

According to Bhardwaj, their team received 1,250 requests the first day, May 3. Eventually calls averaged out to 400 per day. 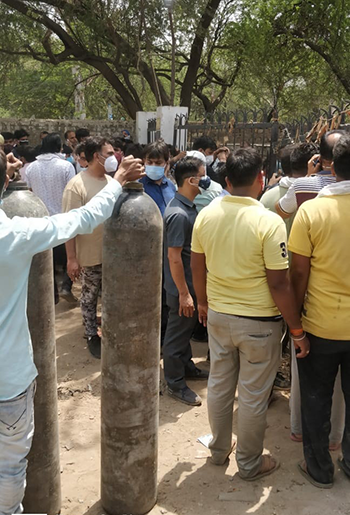 “Everyone in the district had to go through our system,” he said. “After filtering out repeated calls and calls from people outside of the Faridabad District, we filled 650 oxygen requests on the first day. Between May 3 and May 12, we received 5,500 calls."

The initiative was so successful that the chief minister of state scaled up the token system to 18 districts in the region. Bhardwaj said, “Today, we are no longer managing the system, as the system is working. We handed it over to the government.”

Eddy Malesky, executive director of the Duke Center for International Development (DCID), which houses the MIDP program, said “Ultimately, the main goal of an MIDP education is to give fellows analytical tools for problem solving under complex conditions. At DCID, we are so proud of how Anil has translated his knowledge and experiences into meaningful, life-saving solutions that helped his community at such a critical time.”

For Bhardwaj, creating innovative policy solutions requires a commitment to service. “My philosophy has been that unless I as an individual am willing and open to serve in society, no public policy or education can help us.”

Bhardwaj is a broadcasting and cable services adviser in the Telecom Regulatory Authority of India (TRAI).

How Life Looks Through 'My Whale Eyes'