On a day in late August, David Bradway found himself running up a long hill on a dirt road in a far-flung corner of northern Durham. When he reached the top, he looked out on a green expanse of treetops unfolding below.

“It was just a really nice view of the forest looking back toward Durham,” said Bradway, a research scientist in biomedical engineering at Pratt School of Engineering. “It was a tough hill, and it was a super-hot day, but it was worth it to see this neat place.”

For the past 10 months, Bradway has found off-the-beaten path spots as he’s embraced the ambitious mission of running every street in the city of Durham. Starting last fall, after tiring of his running routes, Bradway undertook the challenge to keep him motivated.

“It’s a big challenge,” Bradway said of covering Durham’s 4,140 streets. “I knew this wasn’t going to be a weekend project. It’s something I could work toward for a long time. That appealed to me because it was something I could chip away at.”

Bradway is running with the help of CityStrides, a website that charts runners as they attempt to cover every street in their town. CityStrides uses GPS location data from run-tracking apps such as Strava. The streets involved in the challenge don’t include interstate highways or busy roads where access is limited. But it does include major thoroughfares such as Fayetteville Road, Hillsborough Road and Roxboro Street.

Roads with inconsistent sidewalks have left Bradway running through grass and over driveways. And in sprawling neighborhoods, he has gained an appreciation of just how tricky street layouts can get.

“I have definitely missed streets and had to go back and clean them up later,” Bradway said.

But most of all, Bradway, who runs about 20 miles per week, said he’s come to appreciate the variety of settings and communities in Durham.

“I’ve been in a lot of neighborhoods, so I’ve seen different types of homes and different people,” Bradway said. “There are things you can see on the ground, when you’re passing slowly, that you wouldn’t if you were in a car.”

Bradway isn’t the only Duke employee attempting to run each of Durham’s streets. 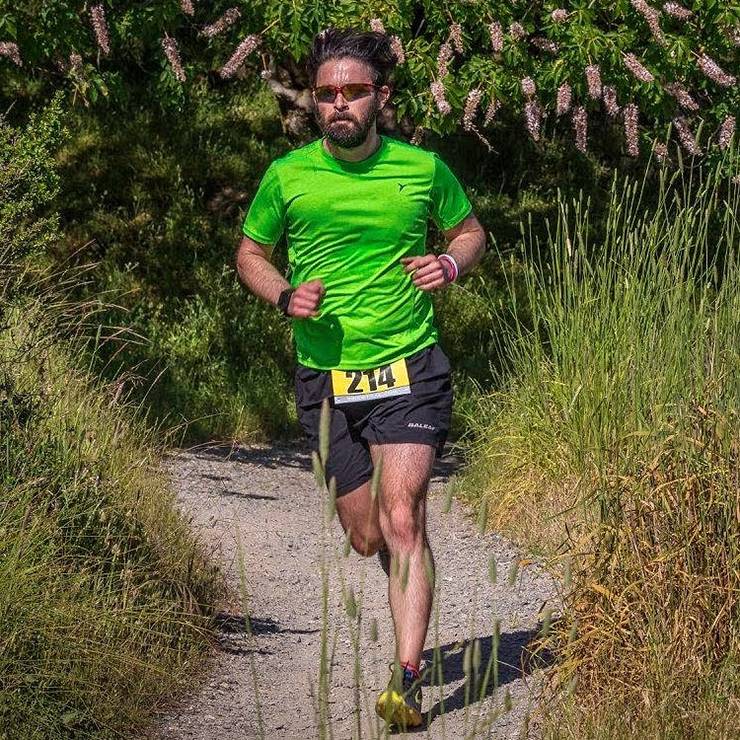 Marty Soupcoff, a learning management system lead with Duke Learning Innovation, moved to Durham from San Francisco last fall. He ran or biked all of San Francisco’s streets using CityStrides and quickly set his sights on doing the same with Durham.

“It’s a way to get to know the city a little better,” said Soupcoff.

Bradway and Soupcoff are following each other’s progress but have not met.

Soupcoff’s quest has a sustainable twist as he’s chosen not to drive to neighborhoods far from his starting point to run. Instead, he rides his bike or takes public transit to the places where each run begins.

Like Bradway, Soupcoff’s commitment to the project pre-dates the COVID-19 pandemic. Both said that working remotely has allowed them to fit more runs in due to a more flexible schedule.

The summer heat and humidity – in stark contrast to the cool, coastal climate of San Francisco – took some getting used to for Soupcoff. So too did the dead-end streets and cul-de-sacs in Durham’s neighborhoods.

Soupcoff, who averages about 25 to 35 miles per week, has covered 2,108 streets, or 50.7 percent of Durham’s roadways. In addition to the CityStrides website, Soupcoff also keeps track of his progress on a four-foot wide map on his wall.

“I would say maybe late next year,” Soupcoff said when asked about a potential completion date. “But that may be overly optimistic.”

Soupcoff’s colleague, Kim Manturuk, associate director of research, evaluation and development at Duke Learning Innovation, is attempting to run every street in Chapel Hill. With 634 streets covered, she’s 65.6 percent of the way there.

Bradway is about 45 percent of the way to his goal, having run 1,886 streets. He said being able to finish the challenge about nine months from now is an optimistic estimate, but having already endured many tough runs, he’s already proven his mettle.

That showed in August, when Bradway tripped and fell while running on Shannon Road, leaving him with bloodied knees and palms. But with more streets to get to, he kept going.

“I didn’t twist anything, I just left a good bit of skin on the sidewalk,” Bradway said. “It hurt, but it didn’t stop me from running. I bandaged myself up and went out for another run.”